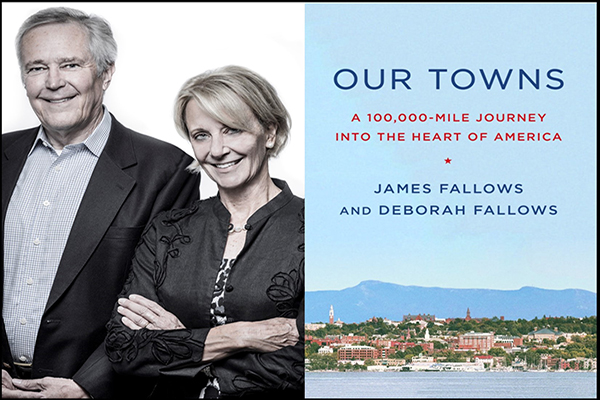 James and Deborah Fallows, acclaimed authors and correspondents from Atlantic magazine, bring their unique perspective on small town America as described in their new book Our Towns: A 100,000 mile journey into the Heart of America.

For the past five years they have been traveling across America in their single-engine prop plane, visiting dozens of small towns. They have met hundreds of civic leaders, workers, immigrants, activists, librarians, artists, elected officials and many more.  They found an America that is well aware of its problems, but also a citizenry crafting solutions with a practical minded determination at dramatic odds with the bitter dysfunction at the national level.  Our Towns describes the dreams and determination of many who are in the midst of making things better.

JAMES FALLOWS has been a national correspondent for The Atlantic for more than thirty-five years, reporting from China, Japan, Southeast Asia, Europe, and across the United States. He is the author of eleven previous books. His work has also appeared in many other magazines and as public-radio commentaries since the 1980s. He has won a National Book Award and a National Magazine Award. For two years he was President Jimmy Carter’s chief speechwriter.

DEBORAH FALLOWS is a linguist and writer who holds a PhD in theoretical linguistics and is the author of two previous books. She has written for The Atlantic, National Geographic, Slate, The New York Times, and The Washington Monthly, and has worked at the Pew Research Center, Oxygen Media, and Georgetown University. She and her husband have two sons and four grandchildren.